The state of Telangana presents is unique in its culture, language and people. It is this strong desire to nurture and preserve its uniqueness for posterity to cherish, which inspired individuals to fight for their cause that led to the birth of the state. A particular reflection of this uniqueness is made apparent through the celebrations of its festivals. The typical Telangana flavour which emanates from these help Telangana to contribute an element of distinction to the diversity of the Indian kaleidoscope.

The colourful Bathukamma festival, celebrated in the month of Ashwin or Aswiyuja is a nine day event and celebrates the worship of the Mother Goddess Gauri. Life and eternity are the very essence of this festival and are reflected in every aspect of its celebrations from the colour of flowers chosen to the elaborate attire of the women participating in the events. The main ritual of the festival involves arranging colourful seasonal flowers in conical structures anointed with turmeric as the Bathukamma, the symbolic representation of Gauri, the mother goddess. Women dressed in their best attires throng the festive locations to worship and sing praises of the goddess Gauri. The Bathukamma festival has become an integral part of the cultural identity of Telangana. Recently Telangana government announced Bathukamma as the Telangana state festival.

The annual festival of Bonalu is celebrated in the Ashada Masam (July/August) and involves the worship of Goddess Mahakali. As “Bonam” refers to a meal in Telugu, the main offering to the goddess is a pot of rice cooked in milk and jaggery.  The pot is then decorated with neem leaves, turmeric and vermillion and is crowned with a lighted Diya. They offer the bonam along with bangles, vermillion and sarees, representing youth and vitality, to the goddess and seek her blessings. Bonalu is the source of great merriment for the people of Telangana.Recently Telangana government announced Bathukamma as the Telangana state festival. 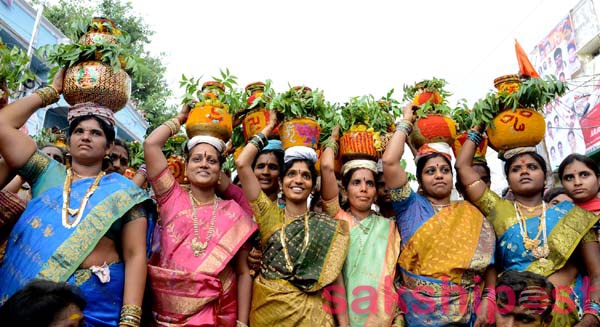 The Samakka Saralamma Jathara, known to be one of the biggest biennial tribal fairs is observed to commemorate the bravery of the mother daughter pair of Samakka and Saralamma who fought against the unjust practices of the rulers. The festival is celebrated every even numbered year on a full moon night in the month of Magh (January –February). Spanning over a period of four days, the Jathara witnesses huge footfalls of devotees who throng to seek the blessings of the legendary tribal goddesses and offer their prayers. It is believed that more than 1.5 crores people (more than 15 million people) visit Medaram during this Jathara time. 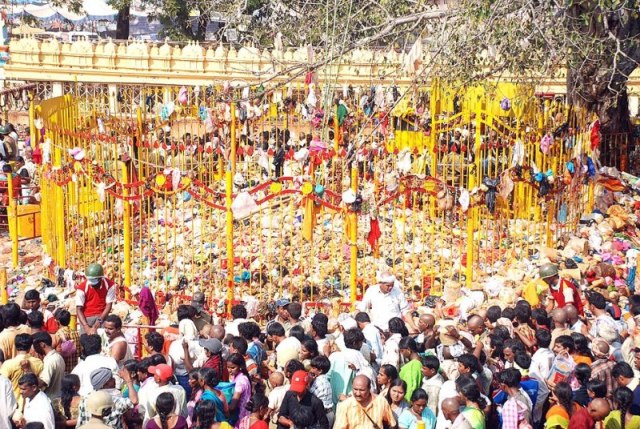 Nagasanpalli in Medak, assumes a special significance among the people of Telangana in the month of Magh during the Edupayala Jathara celebrations.
The Jathara, spans across 3 days and welcome devotees from all across Telangana to purge their sins by taking a holy dip in the waters of the seven streams. The popularity of the Jathara has led the sleepy town of Nagasanpalli to evolve as a much loved tourist destination. 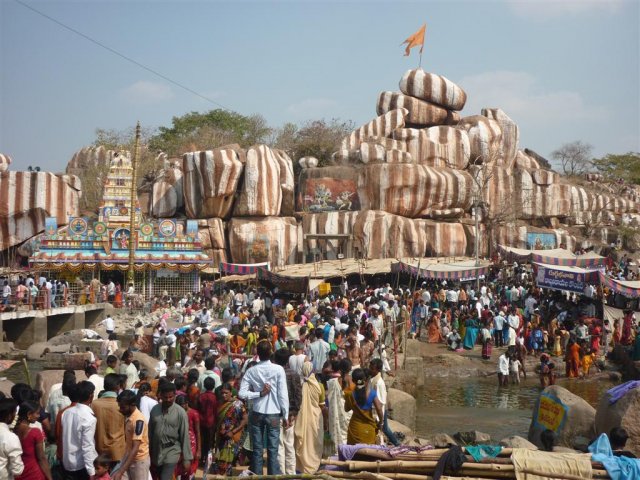 The Nagoba Jathara held in the Keslapur village of Adilabad district of Telangana is second biggest tribal festival of the district. The jathara is a five day event where the members of the Mesaram clan worship the serpent god through various rituals and ceremonies. The Kondagutta Jathara is an annual festival held in the Anjaneya Swamy Temple in Karimnagar district of Telangana celebrated during Hanuman Jayanthi. It celebrates the worship of Lord Hanuman and records footfalls of thousands of devotees who congregate to pay their respects to Hanuman. Devotees participate in the ‘Hanuman Deeksha’ ritual for 45 days, followed by a holy bath. They offer special prayers to Lord Hanuman and pray for their fulfillment. 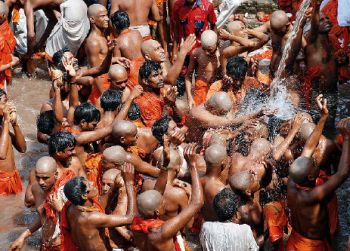