When travelling back to the spiritual history of India, Lord Hanuman (Sri Anjaneya Swamy) is considered as the 11th avatar of Lord Shiva and Rama and worshiped to the most .That is why Lord Anjaneya is praised to be the living of God of the universe. Whatever might be the problems it is believed Lord Anjaneya will solve it for people immediately.He is considered to be strongest and courageous God according to Hindu religion. While there are uncountable number of temples of Lord Anjaneya in India, but some of these temples are very unique and believed to have divine power, and hence people visit them in millions. Beechupalli Anjaneya Swamy Temple is one of the most famous Hanuman temples located in the Telangana state. This ancient shrine is located in Mahabubnagar district of Telangana State on National Highway 7. Lord Anjaneya is the governing Lord of the temple. Statue of the Lord Anjaneya belongs to the 16th century. This temple is located on the banks of River Krishna (200 metres far from the river area). There are two islands near to this temple ‘Gurram Gadda’ and ‘Nizam Konda’. Gurram Gadda island is a larger island and its a village which is known for the fertile land. Nizam Konda island is a smaller one which is very near to Beechupalli Anjaneya Swamy Temple.

The temple is major spiritual tourist attractions of Mahabubnagar District. There are several ghats constructed near to this temple for Krishna River Pushkaralu which happens once in 12 years. People of nearby villages of Beechupalli consider Beechupalli Lord Anjaneya as their family God. History of the Place : According to the medievel history temple was governed by Gadwal Kings till its fall after independence which is under ruins now and their family members are still conducting chariot festival of the temple every year. It is believed the idol of Hanuman has been installed by Sri Vyasa Raya who was the guru of Sri Krishna Devaraya lived in between 1457 – 1539 A.D. And the temple was built by Gadwal Kings 200 years ago with a huge Mantapam. Placing of the Lord Anjaneya : Lord Anjaneya idol here is facing east and the spacious mantapam is facing south. Naming Reason of Lord Anjaneya as Beechupalli : Till date there no historical reason for the name beechupalli but here we could find so many people with names of beechanna , beechamma in local communities of the Telangana Region. 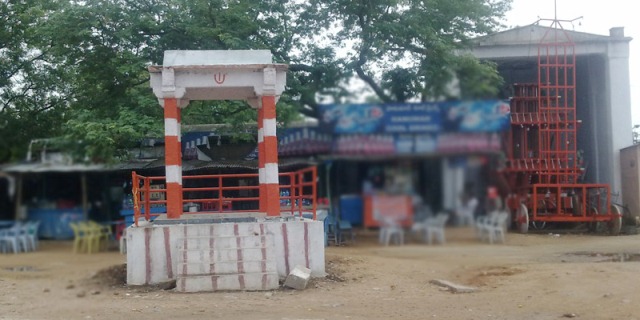 Special Importance of the Place: Most of pilgrims visit the temple for taking sacred bath in the holy river Krishna and darshan of the Lord Anjaneya.There is also a local belief where devotees sleep in the temple premises when their family members died . The recital of Valmiki Ramayana in the morning is a daily routine which includes the regular recital from all important scriptures of the Hindu history. But in very few temples in the country Lord Anjaneya is hearing so much Valmiki Ramayana as here. Devotees generally visit the temple for one day but some of the devotees, who perform Ardh Mandalam stay here for 21 days, Pavu Mandalam (11 days) stay at the destination for 21 or 11 days as per their requirement for performing special pooja.The visitors who want to perform ‘Graha Dosha’ puja also stay more number of days at the temple. How to Reach: It is very easy to reach the place through the bus as it is located on the Hyderabad -Tirupathi highway, and mostly people visit the place through tourist buses as there is a much convenience for halt during the journey. Accomodation: The temple management has provided accommodation facilities with 13 rooms and which are at free of cost to the pilgrims Contact Number: Telangana Tourism Toll Free Number: 1800-425-46464