Keslapur Village – The Revered Pilgrimage of the Gond Tribes The village of Keslapur located in the Asifabad block in the Inderavelli Mandal of Adilabad district is located at a distance of 32 kms from Adilabad and 25 km from the Utnoor Taluk. Its political boundaries include Gudihatnur Mandal in the west, Utnoor Mandal in the South, Narnoor Mandal in the East, and the Adilabad Mandal in the North. This quaint village housing a motley population of 853 inhabitants has its own claim to fame in the tourism map of Adilabad.

Keslapur houses the famous Nagoba Temple. This is a temple dedicated to the worship of the Serpent God Nagoba also known as Shesh Nag. Nagoba is revered by the Gond and Pandhar tribes. Every year they celebrate their devotion to the serpent God through the Keslapur Jathara or the Nagoba Jathara. This is a 5 day event that witnesses participation from members of the tribe from Andhra Pradesh, Uttar Pradesh, Madhya Pradesh, Maharashtra, Orissa, and Chhattisgarh. The event evokes huge curiosity among urban dwellers as tourists throng to Keslapur Village from different parts of the country to witness this unique and interesting expression of their faith. The Gusadi dance performed as part of the festivities is a special attraction for tourists.

The Nagoba Temple, named after the Marathi word ‘Nag’ meaning snake, stands at the confluence of the River Pranahita and the River Godavari. This adds to the significance of the place. The temple receives the maximum foot falls during the Jathara when thousands of members of the Mesaram clan of the Gond tribes congregate to offer their prayers to the Snake God. 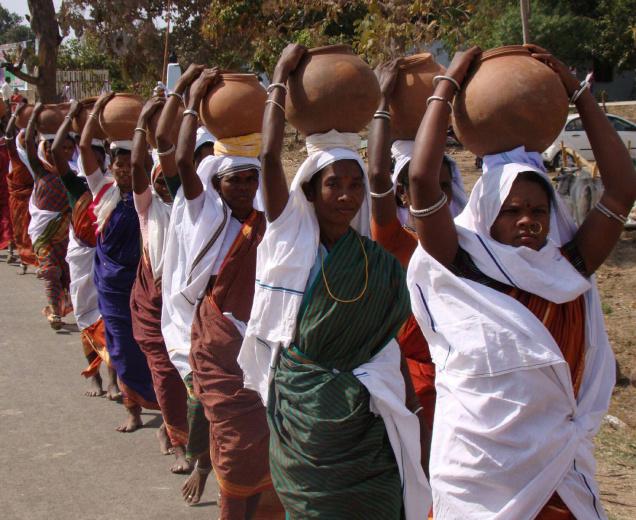 The Snake deity Nagoba is revered not only by Gond tribes from Telangana but tribe members from neighboring Maharashtra are also frequent visitors who come to seek his blessings. Keslapur therefore receives a huge crowd from neighboring states who wish to pay their respects to their revered deity. The flow of visitors reaches a peak in the Pushya Masham corresponding to the months of December –January in the Gregorian calendar when thousands of tribes come to join in the Jathara. Consequently, Keslapur receives adulation and is revered by members of the tribes for being the abode of the Serpent God.

Special Attractions:
– Keslapur is famous for the Keslapur Jathara that is held every year in the months of December – January. 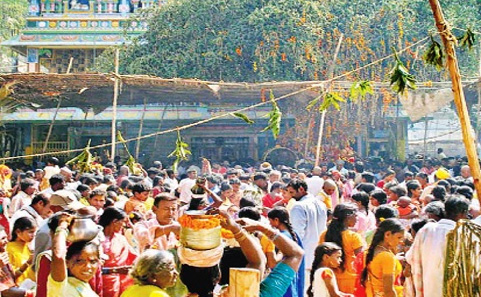 Specialty of the place:
– Keslapur is revered for the presence of the Nagoba Temple. It is also famous for the annual Keslapur Jathara that is celebrated by the members of the Mesaram clan of the Gond tribe.

Where to stay:
– The Utnoor Taluk offers some basic accommodation facilities. There is one guest house and another R & B Guest House in the nearby Utnoor Taluk. Tourists can also stay in Adilabad which offers some good hotels as well.
– Haritha Hotel, Sanjay Lodge, Tirumala Lodge, Raviteja Hotel, and Laxmi Residency Hotel are some of the good hotels in Adilabad.

How to reach:
– Buses ply between Uttnoor and major cities and districts like Hyderabad, Warangal, Karimnagar and Adilabad. Once in Uttnoor, tourists can avail local transport to reach Keslapur Village.