Mahavir Harina Vanasthali National Park of Hyderabad is the home to the national animal – Black Buck. It is primarily a deer park. But there are a large number of reptile species, along with other species of animals, birds, trees and plants, too.

Like almost other places in Hyderabad, Mahavir Harina Park located in Vanasthalipuram, is also related to the princely rulers of the state in the past. The area was the hunting grounds or Shikarghar of the Nizams. With the purpose of preserving the heritage of the city and conserving the environment and precious wildlife (especially the state animal- Black Buck), the hunting grounds were developed into the Mahavir Harina Vanasthali National Park, in 1994. In 1995, on the 2500th Nirvan Anniversary of Saint Mahavir, the park declared as a National Park was named as Mahavir Harina Vanasthali National Park, in commemoration of the pioneer of Jainism- Lord Mahavir. There’s reason to dedicate the park to him too. Mahavir famously quoted that “No gyaani (a learned man) hurts other creatures.”

The park, spread over an area of 14.59 square kilometers, is famous for being home to the endangered species – the Black Buck or as it is commonly called in Telugu, Krishna Jinka. The Black Buck has been a much hunted species and researches show that it has been the most hunted animal in the last three centuries, in India. The declaration of the park as a national park is a step towards protecting this precious creature of our country from extinction.

Besides the Black Buck, the other rare animal species you can see here is the Short-toed Eagle. There are Indian Herons, Quails, Vultures, Egrets, Kites, Cormorants and Kingfishers among other birds. Set out with your binocular-pair or maybe a DSLR to capture the 120 plus bird species in their habitat. The park also is home to Panthers, Cheetals, Civet, Peacock, Wild boars, Porcupines, monitor lizards and over 30 species of reptiles.

The best way to tour the dry deciduous jungle of rocky terrain is to take the Safari service the Park offers, which operates from 9:30 am to 5:30 pm. The 45 min Safari is your very own ‘Animal Planet’ jungle ride right into an actual forest. You’ll see creatures of the wild, living uncaptivated lives in the jungle. The royal Black Buck, grazing, mostly; the beautiful spotted chitals(a variety of deer) roaming hither and thither. Trivia time: Chital is that variety of deer which makes its way to the Hindu legends of Ramayana. The deer that Sita spotted and sent Rama after, was the Chital, native to these regions of India. 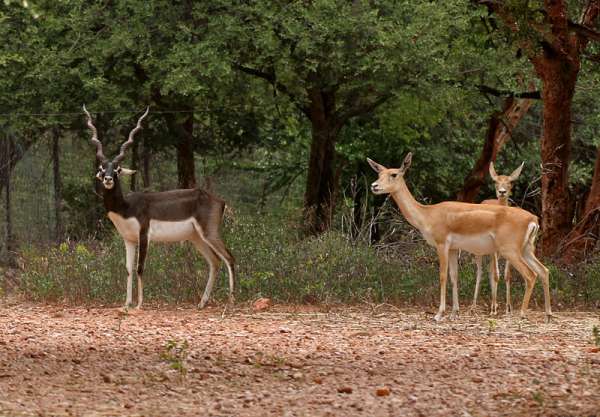 The guides on the safari with you possess vast knowledge of the jungle and beyond and make the ride a memorable experience. Besides the animals, trees that you do not usually find in the city are found in abundance in the Park. There are Sandal, Rosewood, Palas, Lavender, Teak, Amalthas etc.

There are also tourism cottages that provide accommodation, if you’re interested to stay longer, which is not a bad idea to explore the vast jungle. Natural camps, a Library, an Amphitheatre are some of the other educational services available here.

PUBLIC TRANSPORT: Plenty of direct or indirect buses are available to Mahavir Harina Vanasthali National Park from all corners of Hyderabad city.