Medak Fort – The Citadel that Traces the Routes Carved by History

North of the city of Medak, about a 100 km from Hyderabad, the Medak fort is a strong reminder of the valour and courage of the Kakatiyas who ruled over Telangana from 1083 CE to 1323 CE.

Perched on a hillock, the fort, traces its origin to the 12th century, when it was built during the reign of Pratap Rudra, the chivalrous Kakatiyan ruler. Boasting a rich architectural and historical legacy, Medak fort has stood testimony to the changing fortunes of the Kakatiyan dynasty which impacted the whole of Telangana. Despite being ravaged by generations of war and invasions, the fort still bears remnants of its architectural splendour.

The three main entrances or gateways of the fort, leading visitors into its hallowed portals are brilliant specimens of architectural marvels. The Prathama Dwar displays the illustrious structure of the double-headed bird “Gandabherundam” a representative of the Kakatiyan dynasty. The Simha Dwar or the Lion Entrance has the imposing structure of two snarling lions gracing its façade. The Gaja Dwar, the third gateway, is flanked by two massive elephants with their trunks interlocked. ‘Gaja’ and ‘Simha’ in ancient Indian dialect means elephants and lions respectively, which has inspired the naming of the gateways. 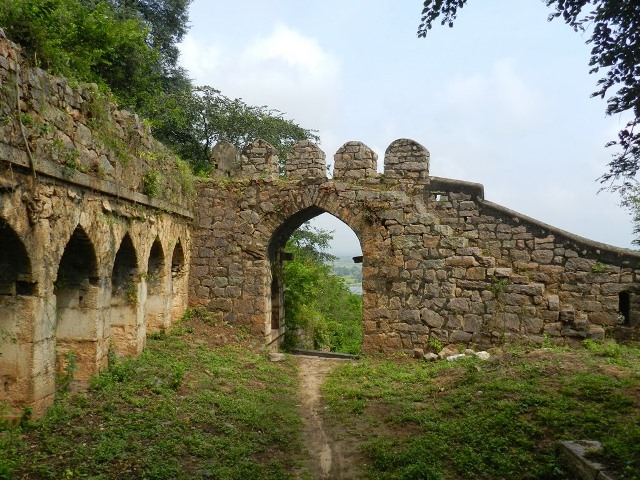 One of gates inside the Medak Fort – Image Source: azassk.blogspot.com

Originally known as Methuku Durgam, the Medak fort has a huge boundary wall which is adorned with several naturally formed bastions from the boulders and rocks that lie strewn in the area. The Qutub Shahi invasion saw the fort enter a new chapter of its history under its Muslim rulers. The remnants of the Islamic rule have left deep imprints on its architectural styles and on several existing structures. The 17th century Qutub Shahi mosque built within the ramparts of the fort is one of the biggest evidence of this. The mosque provides a breathtaking view of the surrounding regions from the top.

Impacts of the intermingling of Hindu and Islamic styles of architecture are apparent in most of the structures found in the fort. The 3.2 meter long cannon, which can be traced back to the 17th century was built during the Islamic rule. It has a muzzle diameter of 15 centimeters and is an obvious remnant of the Islamic style of architecture. However, the unmistakable etching of a Trident mark, a typically Hindu symbol, on its façade lends it an aura of mystery and uniqueness.

History is entrenched in every crevice and every corner of the Medak fort. The cobbled path which leads tourists to the fort gateways is paved through the dense overgrowth of wilderness. This helps to build the air of intrigue which one experiences on entering the Fort’s interiors. Endowed with a fair dose of thrill and enchantment, the Medak fort continues to captivate every visitor entering its ramparts. 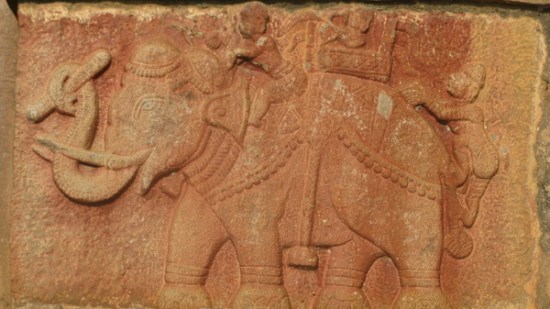 One of the carvings in Medak Fort – Image Source: www.meetup.com

How to Reach:
– As Medak does not have a train station and Hyderabad is the nearest one at 100 km, tourists can reach Medak and avail private transport to reach the fort.
– One can also travel upto Medak town in public transport. State run buses run very frequently from Hyderabad MGBS Bus Stand to Medak Town. From Medak town bus stop, one can avail private transport to Medak Fort. Medak Fort is less than 3 KMs from Medak Bus Depot.

Hyderabad to Medak Bus Timings and Frequency:
– There is a bus to Medak Town from Hyderabad every 20 min.
– First bus starts at 5:30 am and last bus is at at 10: PM

Where to stay:
– Medak provides ample accommodation options that are clean, comfortable and affordable. Moreover, being quite close to Hyderabad, tourists can also travel to Medak on day trips from Hyderabad.
– At Medak Anjagoud Hotels, Green Corner Hotel and Manama Hotel are some of the best accommodation options which can be explored.