Nagulapahad Nalgonda – A Village of the Ancient Temples 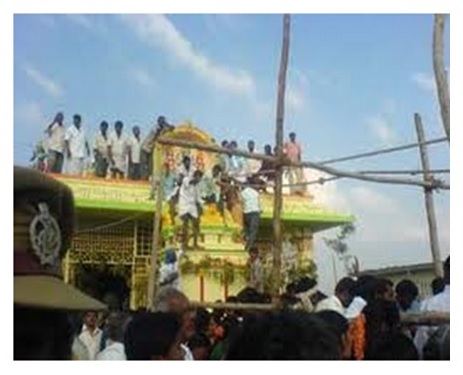 The Nagulapahad is situated at a distance of 52 km from the district headquarters at Nalgonda town and 155 kms from the city of Hyderabad. It falls within the purview of Narayanagudem Panchayath. The village is comfortably ensconced between Suryapet and Chivvemla Mandal in the North, the Nereducherla Mandal in the South and the Munagala Mandal in the East.

Nagulapahad covers a total area of 167 hectares occupied by a small population of 688 Telugu speaking locals. The village is characterized by the lifestyle and culture of these people.

Two of the most famous temples located in Nagulapahad are Trilingeswara Aalayam (Shivalayam) and Veerabhadreswara Aalayam. Both temples were built during the reign of the Kakatiya kings under the Reddy kings. The temples bear the signature style of the Kakatiya craftsmen of utilizing black stone to engrave exquisite sculptures. Both temples bear a strong resemblance to the Thousand Pillar temple found in Hanamkonda in Warangal district. Similarity can also be seen in style and structure between the two temples in Nagulapahad namely, Trilingeswara Aalayam (Shivalayam) and Veerabhadreswara Aalayam and the Pillalamarri temple found in Suryapet town. As all three were built during the Kakatiya period, there is symmetry in structuring and architecture.

Located on the banks of the river Musi, these temples have attained a unique flavor with tourists owing to the spread of rumors and legends that on the occasion of Shiv Rathri Jathara every year strange wonders are seen to take place. Even if one disputes the occurrence of these wondrous happenings the Shiv Rathri festival does entice several tourists to visit the temple and participate in the celebrations.

Special Attractions: The Shiv Rathri festival is a major attraction for tourists who love to visit the temple during this time to offer their prayers.

Where to stay: Nalgonda located at a distance of 52 km offers some comfortable accommodation facilities. Some of these include Swagat Lodge. The starting rate for which is Rs.300-Rs.400, Sri Vijaydurga Hotel, Hotel Balaji Grand (Rs.800 – Rs.1400), Kunda Satyanaryana Kala Dhamam and Amrutha Residency (Rs. Rs.700 – Rs.1800.

In addition to this Suryapet, the town nearest to Nagulapahad, offers various accommodations in the form of hotels, lodges, restaurants. Some of the popular restaurants include Seven Food Court, Sri Prasad Hotel (veg), Balaji Grand, Mamatha, Mayuri, Shilpi, and Vijetha.

Nearest Railway Station: Nalgonda is the nearest railway station. The other station that is also used to access Nagulapahad is the Warangal Railway station located at a distance of 117 km.