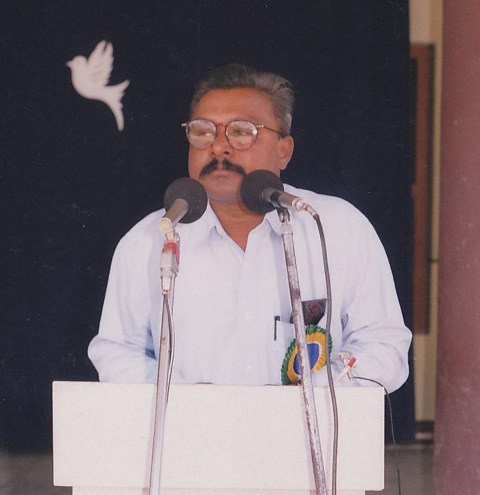 Professor Biyyala Janardhan Rao, a renowned social scientist and activist had a humble beginning as the son of a simple farmer. Born in 1956, he culminated his brilliant academic career with a Ph.D. in 1985. His PhD topic “Land Alienation in Tribal Areas” aroused such widespread interest amongst the tribal communities and the academic circles alike that it came to be regarded as the best contribution to the available literature on Tribal development.

Professor Rao began his professional career as a teacher. His dedication to his profession that spanned over two decades of his life earned him the love and respect of all his associates. His academic proficiency led him to author five books and 43 research papers.

Professor Rao’s role of a social scientist saw him enlisted as a member of a number of professional associations and institutions at the national level. Some of these included the ICSSR Study group on Tribal Policy and Affairs and the Rajiv Gandhi Foundation of Contemporary Studies (RGICS)

Biyyala Janardhan Rao was a human rights activist and has published several research articles and books on Tribal development. His participation in several movements for the protection of tribal rights laid the ground for his subsequent involvement for the greater Telangana cause.

In the mid-nineties, Professor Janardhan Rao became involved in the Telangana struggle for separate statehood. The movement at that time was going through its second phase. Professor Rao’s previous work on Tribal development helped him draw in huge tribal support for the Telangana movement. He firmly believed that the adivasis or the tribals could relate to the plight of Telangana better than anybody else as both had been subjected to extreme exploitation owing to the influx of non-Telangana and non-tribal migrants.

In 2001, Professor Janardhan Rao was one of the few people who set up the Telangana Rashtra Samithi (TRS). He published several articles in Telugu newspapers on the issues faced by the Telangana region. Most of the issues centred on irrigation, employment and financial allocations. His concern over these persistent reasons for discontent led him to coin the phrase “Neellu. Nidhulu Niyamakalu” which sums up the Telangana cause aptly.

His passion for the Telangana cause led him to ignore his health. Professor Biyyala Janardhan Rao died in 2002 owing to heart failure. With his death, the Telangana lost a major champion of its cause. His life was marked with several accomplishments both academic and professional. Fortunately for posterity, Professor Rao’s vast knowledge has been captured and preserved in several journals, books, and articles. His most extensive research was, however, on tribal development. During 1993-1995, Professor Rao worked on a research project as a post-doctoral fellow focused on the tribal movement. The project was titled “Administrative Response to Tribal Protest: A study of Tribal Movements in Andhra Pradesh”.

A visionary, social activist, academician and an ardent supporter of the Telangana cause, Professor Biyyala Janardhan Rao had several titles to his credit. A friendly and congenial human by nature he was a true friend of the masses. He displayed ample evidence of his academic brilliance and leadership qualities and yet remained rooted to his humble origins. His was a life well-lived and revered even long after his death.