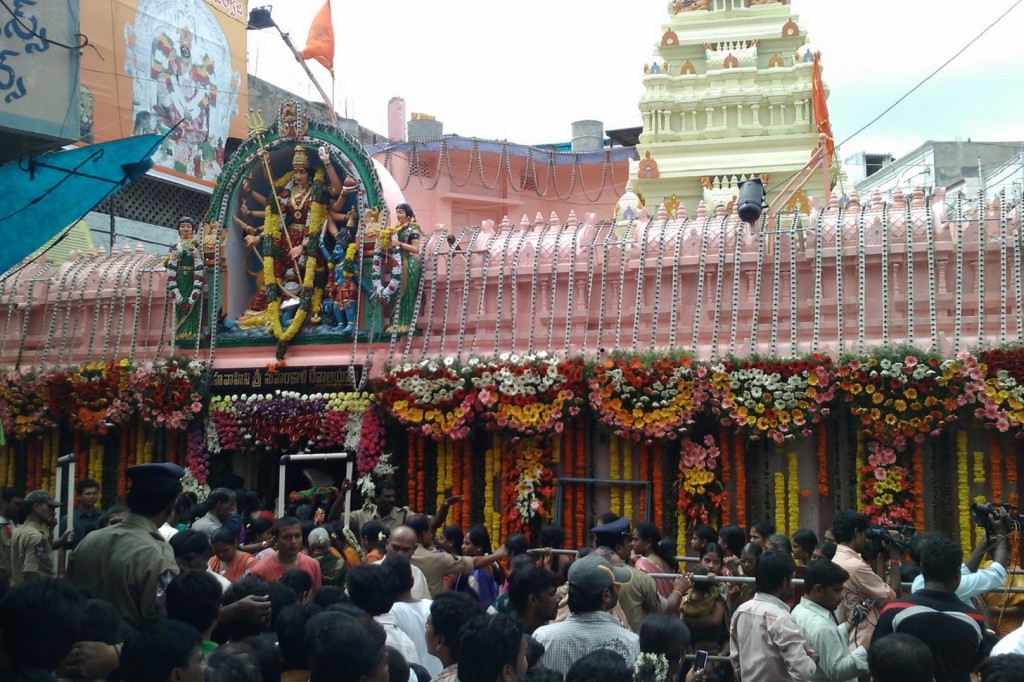 The land of Telangana is an important religious center of Southern India. Out of the numerous shrines present in the Hyderabad city, the Ujjaini Mahankali Temple in Secunderabad is one of the most revered.

It is a 198 year old temple, dedicated to the Hindu Goddess Mahankali, the goddess of time and death.

The temple was built by Sri Suriti Appayya, a Secunderabad citizen. Sri Suriti Appaiah was in the Army, and in the year 1813, was sent to the city of Ujjain in Madhya Pradesh, as a mason, along with other Army personnel. Right from his childhood, Suriti Appaiah had been a devotee of Goddess Ammavaaru and as a religious person, had the habit of going to the temple every day. While Ujjain, he continued the habit by visiting the famous Mahankali Ujjaini Temple there. Over time, he became a stout follower of the Devi Mahankali. Before leaving Ujjaini, he prostrated to the goddess, thanked her for the successful completion of his mission in the city and prayed to her for a safe return back home. He also made a promise to the goddess to install her idol in his native place, Secunderabad.
It is said that the goddess Mahakali was so pleased with her devotee’s faith and devotion the she blessed Sri Suriti Appayya and bestowed kindness upon him.

In July, 1815, true to his promise, Suriti Appayya installed an idol of the Devi, made of wood at the place where the temple of Ujjaini Mahankali in Secunderabad currently is. He also built a small temple around the idol and named it the Ujjaini Mahankali Temple.

In the years to come, Sri Appayya’s son, Sri Sanjivaiah and his friends collected charity from their villages for the construction of the mandapam in 1900 A.D. In 1947, the state government elected a committee and a brahman, Sri Yendapalli Venkataramaiah was chosen for conducting the prayers and other rituals.

Various festivals are celebrated in the this temple viz, Bonalu Panduga, Ghatothsayam, Kolupu Pothraju Bali, Rangam and Saganamputa. During Bonalu Pandagu, women carry Bonam (a pot with jiggery, rice, milk and curd which is covered with neem leaves and with a diya placed on it.) over their heads and walk towards the temple at dawn.

The first Sunday of the month of Ashada, marks the beginning of Ghatothsavam. It is a fifteen day festival in which a ghatam, decorated with flowers goes to every house along with a procession. At the end of the fifteenth day, Kolupu Pothraju Bali is celebrated in which the head of a buffalo is cut in one stroke. But, this practice of animal sacrifice has been prohibited for the last 25 years.

One of the most interesting festivals celebrated is Rangam in which an unmarried woman, standing on a pot prays to the Goddess and is supposedly responded to by the mother Goddess who proclaims the good events which will take place in her life.

Bonalu Jathara at Ujjaini Mahankali Temple is a perfect place of Telangana Culture being followed in its own unique way.

A visit to the Ujjaini temple makes for a Telangana cultural and spiritual experience. 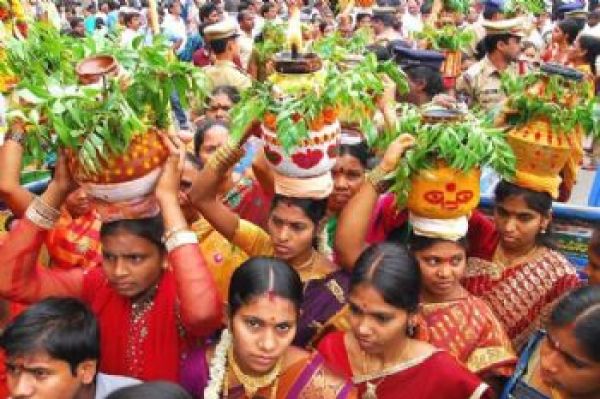 Best Time to visit: During Bonalu Jathara in Ashada Masam of Hindu Calender.