Kolanupaka, a small village near the town of Aler of Telangana State houses a 2000 year old Jain temple known as Kulpakji or the Kolanupaka Jain Temple. Located at a distance of 80 km from the city of Hyderabad the temple is one of the oldest of Jain shrines. It received renovation touches at the hands of 150 skilled craftsmen sourced primarily from Rajasthan and Gujrat. The temple houses three main idols namely, Lord Rishabh, Lord Neminath and Lord Mahaveer.

Jainism found its way into the Telangana region in the 4th century AD. The Jaina movement started from the days of the Satavahanas and picked up speed under the rule of the Rashtrakutas. Several Jain coins have been unearthed in various locations indicating the existence of a relationship between Jain monks and Telugu rulers. It was during this time that Kolanupaka emerged as one of the prominent centres of Jainism. In its present form it is an important pilgrimage site of the Svetambara Jains. 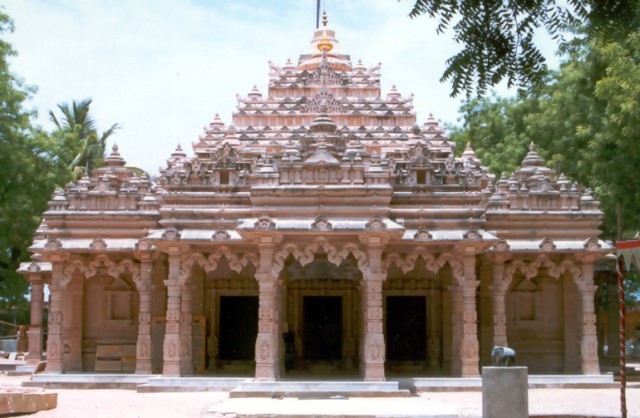 A legend around the origin of the temple is common folklore among the people of Telangana. It is said that when Ravana abducted Devi Sita, the gods instructed his wife Mandodari to immerse the Jinneshwar idol, which she worshipped, in the sea. Several years later, Shankar, a king from Karnataka receives an oracle to bring up the idol in order to protect his country from an epidemic. Therefore with help of a sacred process he brings out the idol from the seas. On his way back he halts at a place called Kolanpaka. It is here that he feels a resistance and is unable to move the idol further. Believing it to be a divine intervention the king decides to build a magnificent temple around the idol in Kolanupaka. Thus was established the Kolanupaka Temple.

Konalupaka Jain temple houses the idol of Lord Rishabha who is considered to be the first of the Jain Tirthankaras. The temple also displays idols of the other Tirthankaras on either side. The most fascinating vista is that of the 51 inches tall statue of Mahaveer. The idol is made of a single piece of Jade and is exquisite in execution. The statue bears an awakened crest-jewel of consciousness between the eyes and an adamant heart charka.

The temple uses red sand stone and white marble aesthetically to enhance the stylistic aspects of its interiors. The entrance gateway of the temple is flanked by Lord Simandar Swami and Mata Padmavati. The most beautiful piece of art within the temple premise is probably the huge stained glass window depicting the Jain guru Parshvanath.

The Kolanupaka Jain temple is an architectural marvel. There is beauty engraved in each pillar, wall as well as the Tirthankara idols which surround its premises. Even the temple roof is replete with carvings or stained glass paintings like the one of Jina Parsvanatha mentioned in the preceding section.

The small village of Kolanupaka draws its name from the presence of several small huts near lakes that used to abound the area at one point of time. In Telugu ‘Kolanu’ means lakes and ‘paka’ means huts. Konalapaka area is famous for several other temples like the Shri Veeranarayana Temple and Shri Someshwara Temple. The Archeological Department of Kolanupaka has sufficiently contributed into making the place attractive to tourists. They have built a museum which houses various pieces of interesting temple architecture as its exhibits. This includes a huge bronze bell. Visitors are also welcome to take a look at an inscription which refers to the bell being a gift to God Somesvara of Kolanupaka by Kanuappa Nayaka. The Museum is located within the premises of the Someshwara Temple.

Special Attractions:
– The huge statue of Mahaveera which is made of a single piece of Jade stone is a major attraction for tourists.
– Kolanupaka is a religious site which has strong historical significance. The Jain temple is one of the most popular places of visit. However, the place is also frequented by tourists in order to savor the feeling of being part of history.

Location: Kolanapaka Jain Temple is located at a distance of 7 Kms from Aler and 78 Kms from Hyderabad. 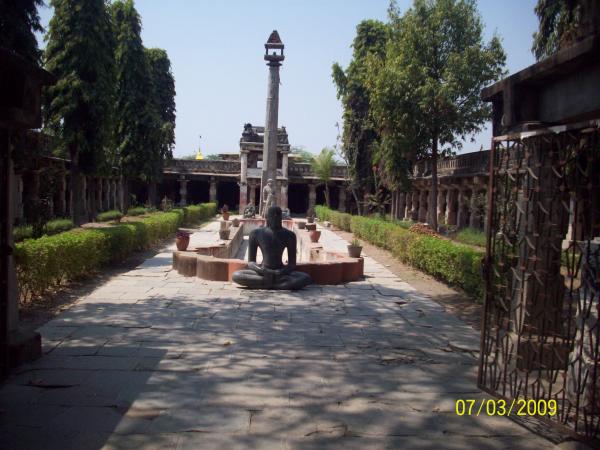 How to reach:
– Aler is well connected with all cities of Telangana like Hyderabad, Warangal, etc.Majority of the trains in route Secunderabad to Kazipet stop at Aler.
– Aler is also well connected with bus facility from Hyderabad and Warangal. All buses from Hyderabad to Warangal go via Aler.
– The Kolanupaka temple is located at a distance of 7 km from the Aler town.  Tourists can hire an auto or tonga from Aler town to reach the temple.

Where to stay: Aler town is located just 80 km from Hyderabad and from Warangal. Visitors can stay in comfortable accommodations provided in Hyderabad or Warangal and make day trips to visit the temple.