Kakatiya Rulers – The Valiant Kings Who Defined the History of Telangana 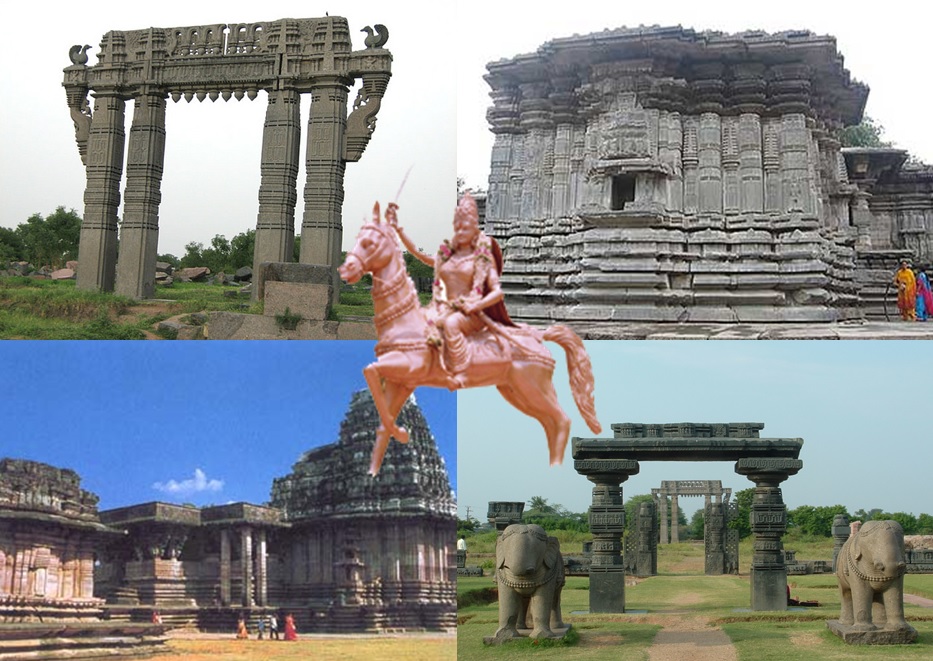 The history of Telangana bears the indelible stamp of valiance impressed on it by the great rulers of the Kakatiya Dynasty. The land was witness to immense strength and indomitable courage that were the principal characteristics of the Kakatiya Kings and Queens. It is this courage which allowed them to bring the disparate principalities of the Telangana region under a single sovereignty and don the state with a feeling of oneness. During this time, Telangana also witnessed an explosive growth in art and culture. Kakatiya rulers were great patrons of various forms of art and have impacted several temples, palaces, forts and gardens with their signature architectural style.

Kakatiya rulers rose to fame in the 11th century when Prola II declared complete independence from the Western Chalukyas of Kalyana in 1083. The Kakatiya strength which had already started making bubbles in the whirlpool of power supremacy was finally unleashed in its full glory. Prola II emerged from being a mere feudal chieftain to become the first ruler of the Kakatiyan Dynasty.

In 1158, Prola II was succeeded by Rudra or Rudradeva. Also know as PratapRudra I, his formal name after his coronation, Rudradeva spent a substantial portion of his reign in consolidating his scattered dominions. Gradually with perseverance, strength and valiant efforts, Prataprudra had been able to consolidate the disparate principalities into a single uniform empire. He constructed the indomitable fort at Warangal or Orugallu and established it as his second capital. By 1162 Rudradeva was also able to focus efforts towards consolidating the coastal region. It was during one of his confrontations with the Seunas or the Yadavas of Devagiri in 1195 that Rudradeva lost his life at the hands of Jaitrapala I. In this battle his nephew Ganapatideva was imprisoned by Jaitrapala I.

Though Rudradeva expended most of his efforts in consolidating his empire, he can however be attributed with having built one of the most beautiful temples that is till today considered to be one of the jewels in the crown of Indian tourism – The Thousand Pillar Temple in Hanamkonda. Built in1163, it is one of the best examples of Kakatiyan architectural genius. Its unique star shaped structure is supported on thousand pillars from which it draws its name. Each of these pillars, the temple walls and ceilings are all elaborately decorated with engravings and sculptures drawing inspiration from the Kakatiyan life and art. The temple houses the shrines of three presiding deities, Shiva, Vishnu and Surya. The Nandi Bull Structure gracing the entrance of the temple is an excellent example of the genius of the Kakatiyan craftsmen.

Following the death of Rudradeva and the imprisonment of Ganapatideva, the Telengana throne chose Mahadeva, brother of Rudradeva   and father of Ganapatideva, as its next occupant. Mahadeva ascended the throne in 1196 and had a short yet impressive reign. He died in 1198 trying to avenge his brother’s death and trying to free his son from the Yadavas.

Subsequently, Ganapatideva, who was released by the Yadavas, soon ascended the throne in 1199. Ganapatideva with the able support of his general Recherle Rudra unleashed a new epoch in administrative brilliance ever to be seen in the history of Telangana. He was single handedly responsible in uniting the Telugu speaking community scattered throughout the erstwhile Telugu speaking land from Karimnagar and Anakapalle in the north to Ongole in the south. In other words, Ganapatideva devoted 80 brilliant years in drawing up the blueprint for creating the modern day Telangana.

In addition to Ganapatideva’s strong hold over his dominions, evidences reveal a softer side to his nature as well. He was a great patron of art and culture. Several of Telangana’s famous structures have been built under his aegis. Notable among these being the Golconda Fort built in the 13th century, and the RamappaTemple. The sculptures and the engravings found within these speak volumes of the passion for art possessed by its patron. The RamappaTemple built in 1213 was ably supervised by Ganapatideva’s commander Recherle Rudra. It bears engravings that have been responsible in reviving some of the most beautiful dance forms like the Perini dance thus enriching the cultural vaults of Telangana.

As Ganapatideva had no sons to carry forward the dynasty he placed his daughter Rudramba or Rani Rudramma Devi on the throne in 1262. Rudramma was reared as a son and was also named Rudradeva in the age-old Putrika ceremony. She was probably one of the most famous Queens in the history of the Kakatiyan dynasty, next only to her father Ganapatideva. Her grit and determination to prove her worth helped her squash internal rebellions and control external aggression with an iron fist. She was one of the first few women in the Indian society who proved that strength is not possessed by men alone. Her courage and velour won her appreciation even from her enemies. It is with this power that she marched ahead to curb the power of the Yadavas and the Cholas and hold her supremacy over complete Telugu speaking land. She however died in 1289 fighting rebels.

In 1290 Rudramma Devi was succeeded by her grandson Prataprudra whom she had earlier adopted as her heir. Prataprudra had a difficult reign marked as it was with incessant internal strifes and external incursions. Despite these hindrances, Prataprudra was instrumental in implementing several good administrative reforms. Later on when the Vijayanagara Empire came into power, these same reforms formed the basis for their governance as well.

The Kakatiyan Dynasty started witnessing its downfall in 1310 when Prataprudra suffered a terrible defeat at the hands of Ala-ud-din-Khilji. This was followed by the final assault by Mohammad-Bin-Tughlaq in 1323 triggered by Prataprudra’s refusal to pay tribute to the Delhi Sultanate after the death of Ala-ud-din-Khilji. Prataprudra though defeated made sure that the pride of the Kakatiya rulers remained unblemished and died on his way to Delhi.

Telugu language became popular starting from Kakatiyas. Also Kakatiya rulers encouraged poets and artists during their time. The famous Perini dance was during the time of Kakatiyas. Soldiers used to perform Perini dance before going for war. Perini dance has a unique importance as it is believed that the dance gives immense power and energy to soldiers.

The velour displayed by the Kakatiya rulers has been instrumental in shaping the destiny of Telangana. Their long and eventful reign spanning from 1038-1323 CE has left an important impact on the society, culture and lifestyle of the Telangana people. Their attempts at unifying the disparate forces have brought about a feeling of solidarity and embedded pride in the hearts of the people for their own history and culture. It is this pride which has led them, generations later, to shape their destiny all over again.