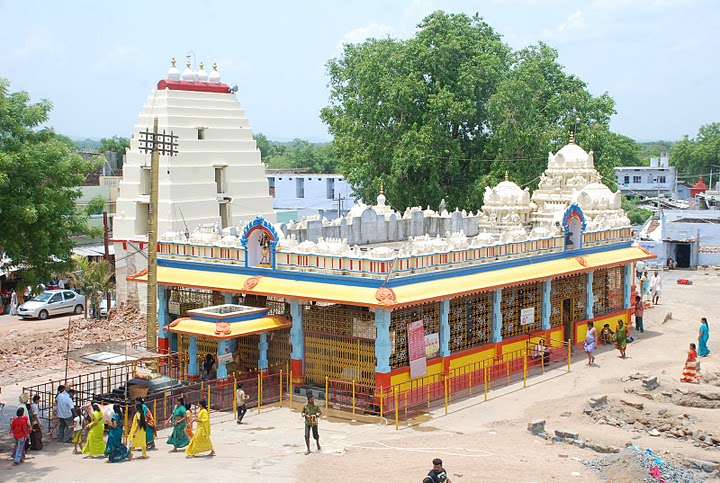 The rich treasure house of Indian mythology has often been responsible for popularizing several interesting destinations among tourists. The Sri Veerabhadra Swamy Temple located in the temple village of Kuravi in the Warangal district is one such tourist spot that is seeped in legends.

The temple houses Veerabhadra Swamy, an incarnation of the Hindu God Shiva, along with his consort Shri Bhadrakali as its presiding deity. Veerabhadra Swamy is also known as Koriveeranna amongst the locals. The mythology associated with it recounts that Sati, Shiva’s wife and King Daksha’s daughter gets to know that a great Yajna that is being organized by her father. She attends the ceremony only to find out that both she and her husband Shiva have been deliberately excluded from the list of invitees. When she questions her father on this, he insults her husband. Angered by this, Sati immolates herself. When Shiva hears of this he is furious and thrashes his own hair on the ground. A huge volcano erupts from this spot and Veerabhadra emerges as a manifestation of Shiva’s anger.

Given the legend that inspires his creation, Veerabhadra is represented as having an angry face, three eyes and several hands. The hands are shown wielding multiple weapons to vent fury on the world to avenge the death of Sati.

The Kuravi Veerabhadra Swamy temple is said to have been built by Bheema Raju (during 900 A.D.). He belonged to the Vengi Chalukyan dynasty. When governance passed into the hands of the Kakatiyan dynasty, Betharaju –I took up the work of renovating the temple complex.

Kuravi is located 11 km away from Mahabubabad and is easily accessible from the town. Tourists can avail a host of transport options ranging from auto rickshaws to luxury buses in order to access the temple. Mahbubabad is also known as Manukota and is the second largest town in Warangal district of Telangana.  Kuravi, also known as Korvi, is around 70 km away from the Warangal city.

The temple attracts huge crowds during festivals like Ugadi (Telangana New Year), Vinayaka Chavithi , Sankranthi Uthsavalu , Sri Ramanavami Celebrations , Kartheeka Masothsavams , Dussera Celebrations (Nava Ratri) , and Deepavali. However, the festival which attracts the maximum number of footfalls in the Kuravi Veera Bhadra Swamy Temple is the Mahasivratri Brahmothsavam festival. This is one of the biggest festivals to be celebrated in Kuravi. It celebrates the celestial wedding of Sri Veerabhadra Swamy and his consort Sri Bhadrakali. The temple during this time is a treat to watch. The whole area is decorated and decked up. The Brahmothsavam celebrations are held for 16 days. Devotees arrive in huge numbers to participate in the large scale celebrations. They observe Jagaram to commemorate this holy union and seek blessings from the Gods.

The Kuravi Veerabhadra Swamy Temple is frequented mostly by people from the tribal community. They form a principal part of Veera Bhadra Swamy’s devotees. This results in the temple premises being a prospective market for buying and selling of tribal jewelry particularly during the time of the festivals. Other than tribals, the Veera Bhadra Swamy Temple is also considered to be a revered spot by non-tribals and is often frequented by them.

The Kuravi Veerabhadra Swamy Temple in Warangal is a must-see for all. 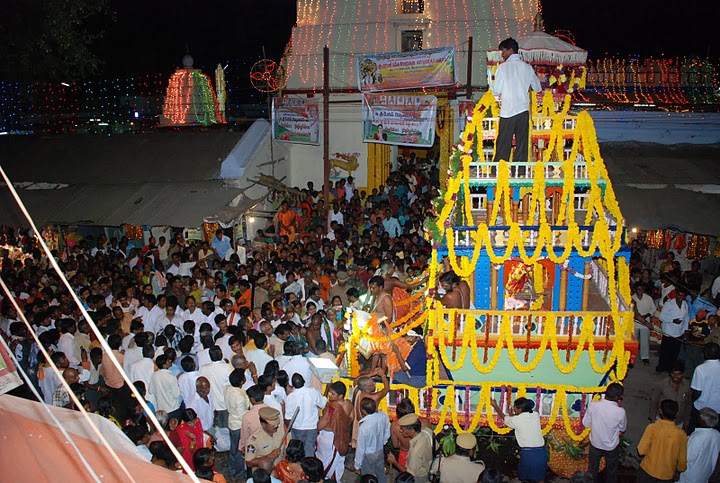 Location: Veerabhadra Swamy Temple is located in a village called ‘Kuravi’ which is 11 Kms from Mahabubabad town.

How to Reach:
– Mahabubabad is well connected to Major cities of Telangana: Hyderabad, Warangal, etc. through railway network. All the train going from Hyderabad and Warangal to Khammam go via Mahabubabd. One can get down at Mahabubabad and catch a public bus or shared auto or Jeeps. Journey time from Mahabubabad to Kuravi is 15-20 min.
– Daily buses ply from MGBS Hyderabad to