Mrityunjay Cartoonist (full name: Mrityunjay Chiluveru) is the man credited with making Telangana smile. His witty and contextual cartoons seen in most Telangana dailies cover the recent events taking place in the social and political lives of the Telangana people. His cartoons are not only marked by extraordinary wit and intelligence, but has also been instrumental in impacting the Telangana movement in several ways. Currently he is working with Namasthe Telangana Daily under the supervision of Sri Allam Narayana garu (the Editor of Namasthe Telangana)

Born to the talented textile artist Sri Chiluveru Ramalingam, Mrityunjay’s childhood was   spent in liberally dabbling with colors and sketches. His father, an expert artist who specialized in the tie and dye form of weaving (also known as Ikat), often encouraged him to spend time by copying cartoons from the daily newspapers. That happened to be his initiation into the fascinating world of Cartooning. 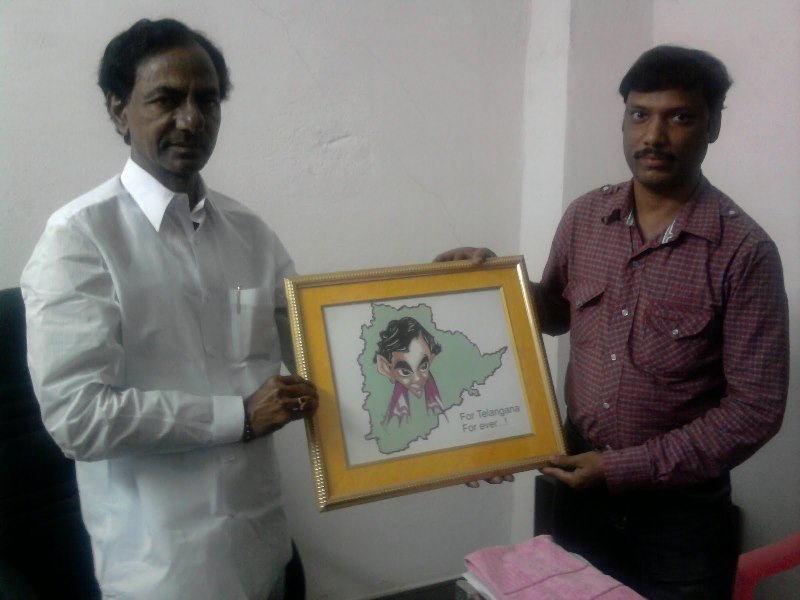 A native of the Bhoodan Pochampally village located in the Nalgonda district, Mrityunjay Cartoonist also drew inspiration from his mother who was an artisan. Drawing and sketching which was a natural part of his growing up years later gradually acquired a much larger position in his life. In 1996, he began his career as a professional cartoonist in the political magazine ‘Bobbili Puli’. The magazine published a weekly edition under the editorship of K. N. Y. Patanjali. This was followed by his decade long stint in ‘Andhra Bhoomi’, another Telugu daily.

Mrityunjay’s professional career also led him to dabble in animations. Inspired by Ann Telnaes, the political cartoonist at the Washington Post, Mrityunjay experimented with 3D cartoons. Most of these were executed during his stint at TV5. The political cartoons, designed using the 3D animation software Maya, turned out to be a huge success. This was followed by some 2D and 3D commercial advertisements. 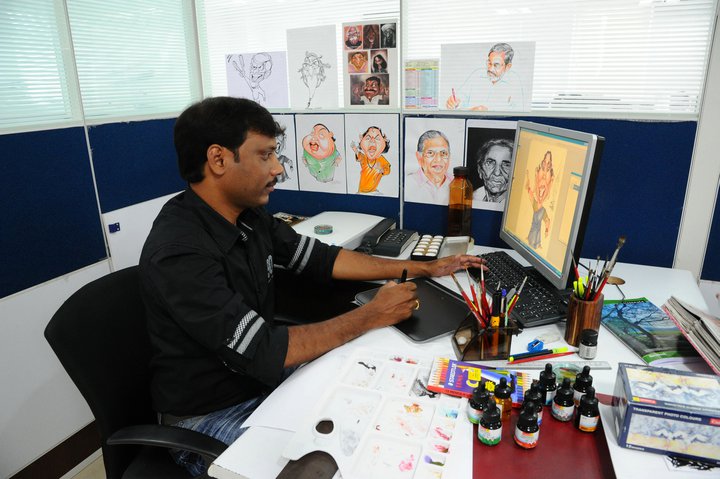 Mrityunjay at his work place

His excellent skill as a cartoonist took him around the world and helped him win several accolades. Mrityunjay Cartoonist was the proud recipient of the ‘Best Cartoonist Award in the Leng Mu contest held in China. He also won the ‘Excellency Award’ at an International contest held in Greece and bagged the first prize at the “National AIDS cartoon contest”.

Mrityunjay’s witty pocket cartoons in Hyderabaadudu won the appreciation of Dr. Y. S. Rajasekhara Reddy, the leader of the opposition, who showcased them in the State Assembly. He also substantially contributed to the Telangana Movement through his unique art form. His cartoons on the movement have become immensely popular and have also received huge adulation from people around the world. They have also been the source of inspiration for many contributors to the Telangana cause. 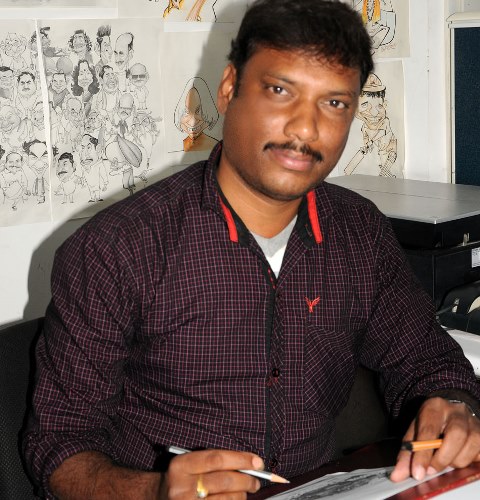 Mrityunjay’s current stint with Namasthe Telangana, a Telangana Telugu newspaper and portal, has led him to be more actively involved in the Telangana movement. He now awakens the interests of millions to the Telangana cause as he churns out news and events using the medium of cartoons; his favorite inspirations being politicians NTR and KCR. This self-confessed uneducated (in the nuances of the English language) cartoonist declares that his knowledge of his art is sufficient to help him reach the hearts of the masses – a fact that has been proved time and again. 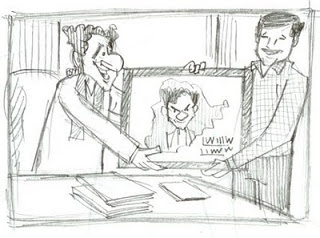 The 38 year old post graduate in Political Science believes that creativity is spontaneous and does not require one to spend prolonged hours behind their desks. From the ash portraits on the blackened walls of his mother’s kitchen to his WACOM digital drawing board, he has indeed traversed a long journey.  However, he believes in experiencing the joys of moving ahead in the journey taking his art to newer standards with each passing year.